Regulation and Culture - a Future Dystopia?

Over the past few months I've been wondering when it was that British calendars started setting the first day of the week as Monday. For a while now I've been having to switch my start day to Sunday whenever I set up a new computer or a new online account and, only recently, I discovered that the Monday start comes with the UK localisation features.
However I grew up with my weeks starting on Sunday. So I wondered who had decided and when that Monday is the first day of the week in the UK while, say, in the US the first day is still Sunday.
A quick bit of research brings up ISO 8601 (see timeanddate.com) which was devised by the International Standards Organisation in 1988. It defines a completely standardised system of describing times and dates. This was deemed necessary because of the vast variation in cultural definitions for these things. Here's a wee example local to me. In Ghàidhlig (Scots Gaelic) there are two names for Sunday: Didòmhnaich, the Lord's Day, or Latha na Sàbaid, the Sabbath Day. The former implies Sunday is the first day of the week, the day the Lord rose from the dead, while the latter implies Sunday is the last day of the week, the day the Creator rested. I expect there's a lot of conflicting Catholic and Reformed theology in there, but that's not the point of this article. These are cultural definitions that set the context in which people experience the passing of the week. Mix in the other great religions, commercial concerns about the working week and the requirements of law and government and there can be many of these.
Other time problems occur with phrases like, "I'll meet you at half two," which sets a meeting for half past two in some cultures or half past one in others. Not a convenient way to work in international business. 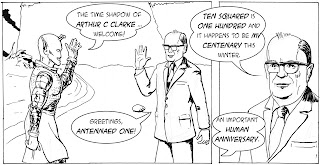 So along comes the International Standards Organisation who set a definition for all time related conversation in 1988 called ISO 8601. This defines ways of expressing the date (always Year:Month:Day, like in Astronomy) and the time, and of setting out the calendar (the week always begins on a Monday).
Most of the countries of the world have adopted ISO 8601, with exceptions like USA, Australia and Canada. So, if I want a calendar that starts on a Sunday I better ask my Canadian and American cousins to send me a care package, because, officially the week starts on a Monday here, whether that`s the way I see the world or not.
So I wonder if this would be an interesting idea for a story. What would a world be like that had been completely ISOed for the convenience of international business with the complete submergence of the world's cultural diversity. This could happen when we look at ISO 8601. What sort of underground black market would arise where you could buy your Didòmhnaich-style calendar, or where you could buy lunch outside of the 1300 to 1330 internationally-set window? Hmm...
at 04 March